Get fresh music recommendations delivered to your inbox every Friday.
We've updated our Terms of Use. You can review the changes here.

to whom it should ft. Ryako & Big Fake 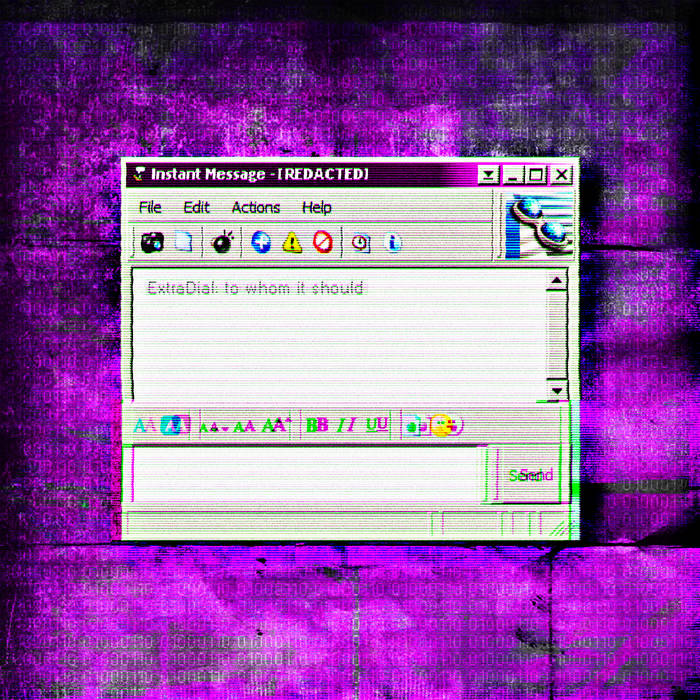 to whom it should is an apology letter written to my younger self, initially addressing that former self and my current form as a duality with my deadname overtly censored explicitly in a manner that is intended to feel jarring and out of place from the sincerity and vulnerability of the tone in the lyrics. This starts to break away as I am referring to my younger self directly, acknowledging the disparities in stressors and conflict between those times, thoroughly marked by a painful confusion, and the current comfort I am afforded by pushing myself to accept a number of truths that are much more obvious in retrospect than I'd realized then. The song primarily is an exploration of the abandonment of our childhood selves and the experiences of stress and pain that are taken for granted. It's about taking responsibility for the ways we allow fear and apprehension to torture children, even if we were at the time children ourselves, because now that we are adults that know better, it can be dreadfully irresponsible to continue to let down the memories of who we were when we once deserved better.

We'd promised then and again point again repeating we wouldn't just keep breathing without reason. It's the least we could do when failed portrayals of our prescribed human kind as issued were but a recursive script we'd reread, as conscripted, then list every misstep as proof this was a life we were never meant to live through.

Never held in an honest hand, that handle's a denominant that lands like katanas on skin, exposing the best we could give to a world without leeway for we who may harbor such conflicts among gods and goddesses' gazes. Our path laid charybdic, this tryptych, a maze between pastiche and couth. We shouldn't have to be told what's expected of us to assume

How you'd bend without confidence to compliment partners and friends through a hollow lens. Problem bends pressed. Solemn movements produced constant stress. More than time will tell them your truths of orchards your eyes held that arrows would fly through. A sparrow's death died by the calendar day. Met by no heart left breaking, unlike you, and I can't excuse how you'd cry out for courage refused

I'VE BEEN PRETENDING YOU HAD DIED BACK THEN
IF MY COMPLIANCE IS DENIED, THEN WHO AM I TO CRY
WHEN I STOOD SILENTLY BEHIND A WALL OF YOU, NO MIND TO FIRING LINES
MY HELPLESS OUTER CHILD, A HUMAN SHIELD SO I'D SURVIVE

I'M THIRTY NINE AND CAN'T REMEMBER WHAT THAT THUNDER STORM WAS LIKE
TO STRIKE IN HUNGER UNDER COVERS LOCKED IN CUPBOARDS EVERY NIGHT
THESE GOD DAMN METAPHORS OF AGATHYS, WITH COWARDICE AND ICE
FORMED INTO PAULDRONS TO PROTECT ME FROM WHAT I LEFT YOU FOR A LIFE

Each breath I took from you in spite and held in tight enough to choke
I've known no matter undermined intent, regret cut off your growth
There's no defense invoked this time, the lines that hurt you most I wrote
Where's the closure in erasure? Supposed to hate you but I won't

No, no I don't believe in innocence and likely mine the least
And do appreciate the steps you'd steal when both my legs were weak
You don't deserve the ways me and your mind would speak to you
At least Selene can dream now, but how is that supposed to help you sleep?

Bleeper of bloops.
Rapper of raps.

Ridiculously cute and not sorry.